This is another recipe that falls in the category of quick & easy weeknight dinners. I first made this recipe when my son was just a few weeks old. It was one of my first jumps back into the world of cooking after a long break during my pregnancy and early days of motherhood.

In the past 9 months I’ve made this pasta dish at least a half-dozen times more. It just comes together so easily and is very open to improvisation. I’ve added some veggies at time or change the pesto/tomato ratios.

Since having my baby 9 months ago, I have been on the look out for tasty “quick” recipes. Babies don’t always stick to adults’ schedules so you have to do your chores in the spare moments when you can.   My baby is usually very good and will contentedly play with his toys while I try to prep dinner. But sometimes….he just wants to cuddle or be held… in those cases I really need food that is easy to put together and doesn’t involve me standing over the stove for an hour.

I found this Chicken Pomodoro recipe in an issue of Cook’s Country magazine. It was quick and easy, as advertised…and the results were a big hit with mommy, daddy, and nana. Babycakes will just need to wait a few more months and a few more teeth before he can eat this dish. 😉

I made this pasta salad for a Labor Day cookout. It turned about to be the cookout of a million pasta salads. Maybe that is a slight exageration…there were maybe 6 pasta salads there…but that is out of a total of 8 side dishes.  We should have changed the party to a Pasta Salad “cook”-off.  May the best pasta salad win!  I like to think that this one could’ve been a contender.

Yes…here is another recipe that I made months and months ago…when asparagus was in season. Sometimes I can be a bit slow with the posting. If you could see the folder on my laptop of not yet posted food pictures you would see exactly how far behind I am.

But…anyhow… on to the salad.

This recipe caught my eye in an issue of Taste of Home magazine. Just like the Summer Sesame Salad I made from the same magazine, I found that this recipe had a tad too much dressing. (at least for my taste)  Perhaps Taste of Home likes salad dressing a wee bit more than Taste of Mango does. 🙂

This is the perfect salad to serve with grilled chicken at your summer cookout. (it’s almost summer somewhere, right???)

(from Taste of Home magazine)

Sometimes when it gets to be this time of year and the wind is blowing like it is today,  I just want to stay inside with the fireplace going and cook up something hearty and comforting.  Chicken Vesuvio fits the bill (for me) for this kind of day: chicken, potatoes, and veggies stewed in a garlic oregano broth.

I found this recipe for vesuvio in one of my Giada cookbooks but this time I altered the recipe to sub frozen peas for the frozen artichokes since I had peas in my freezer, but alas, no artichokes. 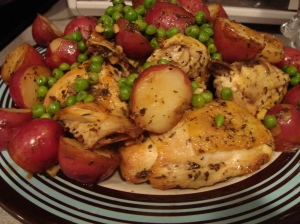 I was looking for a quick & easy appetizer for a casual summer dinner and found this one for Baked Caprese Salad while browsing through one of my Giada cookbooks.  I love fresh mozzarella with tomatoes and basil. It is one of my favorite flavor combos for summertime.

These little bites were very easy to make and came together in minutes. They were also gone in minutes. I will definitely make these again! 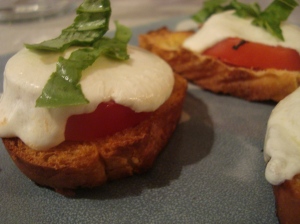 2) Arrange baguette slices on a baking sheet, brush with some of the oil and sprinkle with salt. Bake until the bread is pale golden and crisp, about 5 minutes.

4) Return the baking sheet to the oven until the cheese and tomato are just warm, about 5 minutes.

5) Arrange the toasts on a serving platter. Top each toast with a basil leaf. Using the brush, drizzle remaining olive oil over the basil. Sprinkle with salt and pepper and serve.

I don’t know about you but I have a bit of a recipe obsession.  You can clearly see this by viewing my floor-to-ceiling shelf of cook books. you can also see this if you happen to find my giant binder stuffed to the gills with recipes that I’ve torn out of magazines. Lately I said to myself: “Self, you should really start cooking more of these torn-out recipes so I can discard them as not-worthy of making again or transpose them to the internet and discard the torn-out page”.

And so, that is how I decided to make these sweet simple little ricotta cakes.  I had torn this recipe out of a magazine and it looked like the perfect way to use up some ricotta that I had leftover from making lasagna.

End result: easy to make and delicious. They were gobbled right up by the guys who were installing our new hardwood floors!

3) Beat butter and granulated sugar together until blended. Add egg, ricotta and vanilla, beating until combined.

4) On low-speed, add flour mixture and beat until blended.

5) Drop by tablespoonfuls onto prepared pans. Bake at 350 for 14 minutes or until lightly browned around the edges. Let cool on sheet 3 minutes, then move to rack to cool completely.

6) GLAZE: Beat confectioners’ sugar and milk together until well blended. Dip tops of cookies into glaze and set aside until glaze has hardened.

Growing up, one of my favorite meals was my mom’s homemade meatballs. A recipe that was handed down to her from her mother. I haven’t made meatballs in years and was looking forward to trying Ina Garten’s meatball recipe.

Rebecca of Ezra Pound Cake selected Barefoot Contessa’s Real Spaghetti and Meatballs as the first Barefoot Bloggers recipe for February.  I made some modifications to the original recipe. We don’t eat pork and the market had no ground veal, so I used half ground beef and half ground chicken. I was also generous with the cheese. I have a cheese addiction. Lastly, I let the sauce simmer for a little longer than the recipe called for to let the flavors develop.

The resultant jumbo-sized meatballs were full of flavor. I wish there had been a little more sauce In my opinion, there was about a cup or 2 too little sauce for the amount of meatballs. The leftovers made a great lunch the next day.

Week 2 of me being left home alone by Mr. Mango– loneliness is setting in (poor me), but the house is close to sparkling clean (oh, the joy of not having to pick up after an extra person 😉 ) We both like to cook and usually split the cooking duties, although I usually end up doing the cleaning.

The day after Christmas, as I was sitting home alone, I decided to cook up one of the recipes on this month’s to-cook list: Barefoot Contessa’s Pappa Al Pomidoro. Pappa Al Pomidoro is a country Tuscan bread soup. I was mega-excited to try out this recipe since I’ve been on a bit of a soup kick the past few months as evidenced by the Roasted Butternut Squash Soup, Mexican Chicken Soup, Turkey and White Bean Chili, Ranchero Beef Stew, and Hungarian Beef & Potato Soup that I’ve made and posted about. I figured a soup would keep me warm & cozy in my husband’s absence. I won’t go so far as to say that I cuddled with the soup though. that would just be crazy.

The Pappa Al Pomidoro is comprised mostly of veggies, tomatoes, and bread. The bread dissolves as the soup cooks and the result is a broth that is thickened by the bread bits. (maybe not the most low-carb diet friendly soup!) I made the Pappa Al Pomidoro recipe without the pancetta in the topping and it was still super delicious and the perfect soup for a cold December evening. I loved the touch of the toasted bread and basil on top, it added a different texture and more intense basil flavor.

This delish recipe was selected by Natalie at Burned Bits, who has a wicked cute blog so be sure to stop by and check it out. Check out the recipe after the jump.

END_OF_DOCUMENT_TOKEN_TO_BE_REPLACED

After reading the fabulous work of fiction: La Cucina by Lily Prior…I was inspired to cook some Sicilian style pasta. I found a recipe from the cookbook Sicilian Home Cooking by Wanda and Giovanna Tornabene that looked tasty to me AND conveniently enough, I already had most of the ingredients in my cucina.  The pasta was fairly easy to make with the most time consuming steps being roasting the yellow peppers and boiling the fettucine.

I enjoyed the pasta. It was different from most pasta dishes that I I usually make in that the “sauce” was mainly just olive oil with a few seasonings. In my opinion, for the amount of pasta and other ingredients in the pasta, the recipe called for a smidge too much olive oil.  Next time I might try adding shrimp or chicken to give it a little protein and make it more appeal ling to my husband who for whatever reason seems to be of the opinion that pasta without meat or seafood is like a sin against nature.

Check out the Cook The Books Roundup for the dishes that others were inspired to whip up after reading La Cucina.

Heat the broiler. Broil the peppers on a piece of aluminum foil on rack about 5 inches from the heat source, turning occasionally, until the skin has blackened all over.

Place the peppers in a brown paper bag. Close the bag securely and let the peppers rest for 5 minutes.

Remove the peppers. When cool enough to handle, remove the stem ends, seeds, and any white membrane. Cut the peppers into thin strips and put into a large bowl. Add the tomatoes, capers, basil, fennel, pecorino, and olive oil. Season with salt and pepper and toss. Set aside.

Bring 4 quarts of water to a boil. Add 1 tablespoon of salt. Stir in the fettucine and cook until al dente, stirring often.

Drain the pasta, reserving 1 cup of hot pasta water. Add the pasta to the sauce in the bowl and toss, adding a little hot pasta water if necessary. Taste for seasoning. Serve hot.

Mango-Flavored Life
Create a free website or blog at WordPress.com.